BUSINESS AS UNUSUAL: HOW SOCIAL INTRAPRENEURS CAN TURN COMPANIES INTO A FORCE FOR GOOD.

TAKE ME TO THE RESEARCH

T﻿oday, at the World Economic Forum Yunus Social Business (YSB) released a global research study on social intrapreneurship (SI). The study was conducted by a consortium, led by YSB, along with partners Porticus, the World Economic Forum’s Schwab Foundation, and INSEAD’s Hoffmann Institute for Business and Society. More than 50 globally based executives and social intrapreneurs at multinational giants such as IKEA, Morgan Stanley, BASF, Renault, Novartis, Allianz, and SAP, were interviewed during the nine-month study.

“Business as Unusual: How Social Intrapreneurs Can Turn Companies into a Force for Good” found that, while addressing important societal problems, SI also internally motivates employees and improves employee skill-sets (77%), increases business innovation (50%), and acts as a catalyst for positive corporate transformation (61%).

"The private sector needs to do more if the planet is to have any chance of achieving the UN’s Sustainable Development Goals by 2030,” said Saskia Bruysten, our CEO and Co-Founder. “Ten years ago, CEOs had not yet grasped the role businesses have to play in the existential crisis our world is facing. Fortunately, now most of them do, and our hope is that business leaders can use our report to move from announcements to concrete action. Our report’s SI playbook will give them the hands-on tools they need to tackle the world’s most challenging problems through social intrapreneurship, while leveraging their own core business.”

Additional key findings and takeaways from the study:

“The 50th Annual Meeting of the World Economic Forum is focusing on stakeholder capitalism and how it can contribute to a more cohesive and sustainable world,” stated Francois Bonnici, CEO, Schwab Foundation for Social Entrepreneurship. “For businesses to fully embody this, they need to use their capabilities and resources in cooperation with governments and civil society to address the key issues of this decade. This research brings hard evidence to show how it can be done, and the benefits to society and to the companies, and supports our own efforts as the Schwab Foundation in recognising Corporate Social Intrapreneurs as a new breed of leadership, bringing them as peers to CEOs and government leaders in Davos.”

“One of our most surprising findings was that the biggest obstacle to implementing a social initiative is internal hurdles,” said Bruysten, noting that 84% of interviewees reported internal obstacles were more challenging than external ones. “A study participant summed internal obstacles up best by calling them the ‘corporate immune system that attacks anything that doesn’t look like profit maximization’. That means, for example, that social intrapreneurs might have a tougher time getting internal buy-in and necessary resources than they would delivering medication or clean drinking water to rural Africa. CEOs who don’t take advantage of SIs are leaving massive opportunities on the table.”

“Business as Unusual: How Social Intrapreneurs Can Turn Companies into a Force for Good,” “The Social Intrapreneurs’ Playbook,” and 16 case studies from business leaders (such as Novartis, SAP, Morgan Stanley, and Total) are also available today for download here www.yunussb.com/business-as-unusual. ‍ 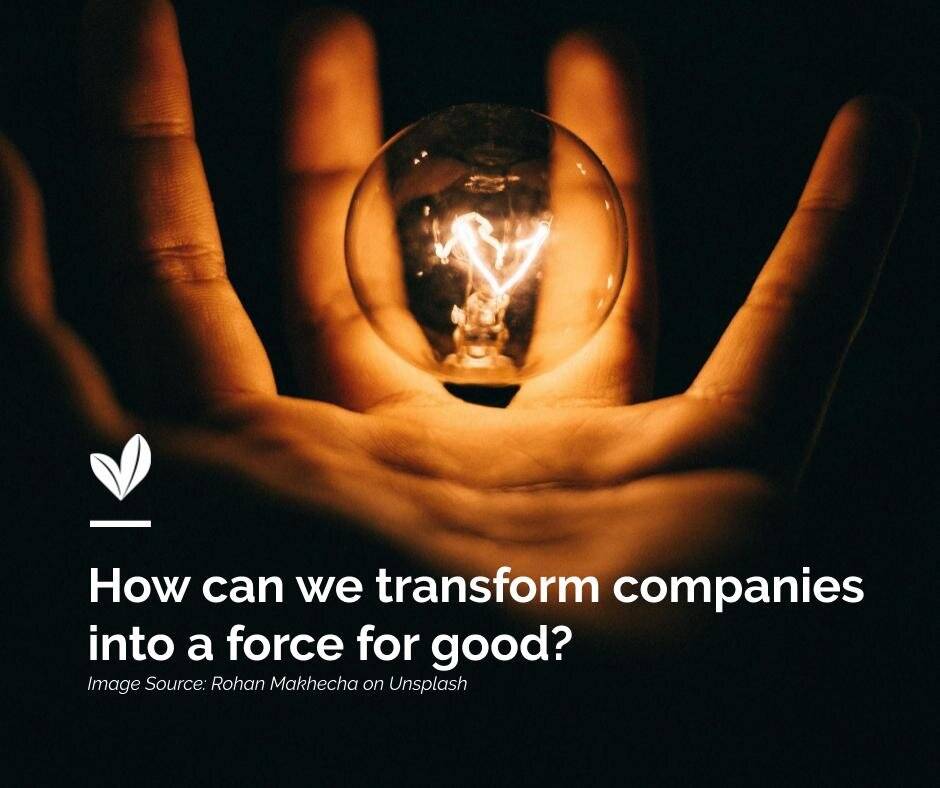 Are you a social intrapreneur? Do you transform the way companies think about business? At Yunus Social Business we want to better understand the key challenges and success factors social intrapreneurs are facing. Our work maps out the emerging sector of intrapreneurship in collaboration with leading academic institutions and practitioners. 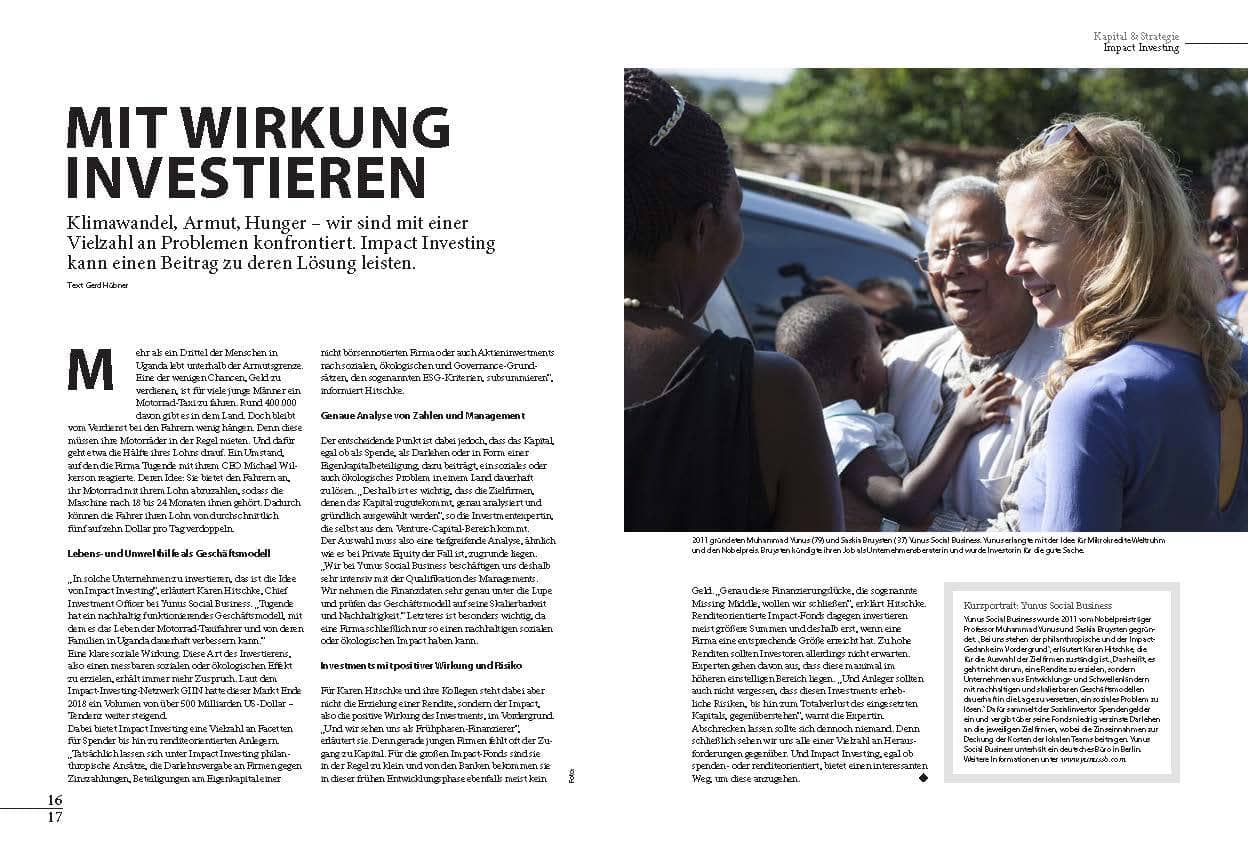 Our Chief Investment Officer, Karen Hitschke, spoke to Gerd Hübner for Hauck & Aufhäuser Magazine about the investments we make with our philanthropic venture funds. Read the article in German below. 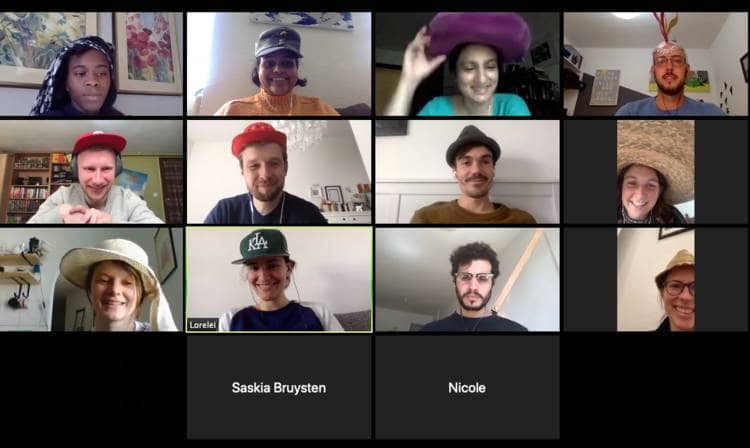 The (Hiring) World is your Oyster

Once the dust has settled, the Covid-19 outbreak may fundamentally shift everyone’s professional lives. Even before the pandemic, there was a rising demand for more flexibility in the workplace and now with its recent mass scale experimentation, remote work may become the new normal. If that is the case, HR will have to evolve ‘remotely’ and become essential to any small or large business’s conti